Landing Stage Received as a Gift from Xiamen Magistrate Li: It opened the door for exchange between Fujian and Taiwan.

Magistrate Li said that the cooperation between Kinmen and Xiamen can open the door of exchange between Fujian and Taiwan, and establish the foundation of the co-prosperity of the Chinese people.  He hoped the set-up of the landing stage will bring safety and comfort to people from both Kinmen and Xiamen.  And hopefully, this will urge the central government to pay more attention to the "golden route" between Kinmen and Xiamen, so that the exchange between Taiwan and Kinmen will reach a greater level.  He also mentioned that, over a long period of time, airplanes have been experiencing problems landing in the Kinmen Airport normally because of the heavy fog.  This situation can be improved with Xiamen's help.  The Xiamen Gaoqi International Airport can be the alternate airport(10) for Kinmen.  In the near future, the second and larger airport between Dadeng Island and Xaiodeng Island will be built.  It is being planned and invested by Mainland China.  But the beneficiary(11) is actually Kinmen.  Soon the combined living and administrative city of Kinmen and Xiamen will become reality.  Today we witnessed an historical event together.  Following the track moving forward, and sparing no efforts and wisdom, the cooperation between Mainland China and Taiwan will be concretely(12) improved, and the peace across strait will arrive one day.

Deputy Mayor Pan indicated that, since the construction of the travelers' route between Kinmen and Xiamen in 2001, the number of passengers has been climbing year by year, from around 21,000 in the first year, to 910,000 last year.  This year the number will probably go over 1 million.  This route has already become an important route between Mainland China and Taiwan.  Therefore, Xiamen has already extended the Dongdu International Wharf and the WuTong Combined Transport Wharf to ease the problem.

Deputy Mayor Pan said, the presenting of this landing stage named "Wu Yuan" as a gift to Kinmen is the consensus(13) of governments from both islands.  The purpose is to guarantee the simultaneous improvement of Kinmen Shueitou Pier's anchoring capability, since the number of passengers journeying through the direct cross-strait transportation is increasing.

Councilman Hong Cheng Fa thanked the Xiamen Municipal Government for the gift, the "Wu Yuan" landing stage.  He said, since the "Mini-Three-Links" policy took effect in 2001, there have been a lot of limitations which make the "Mini-Three-Links" docks unable to function as they are supposed to.  Until June 19th, 2008, the policy was deregulated.(14)  But the Shueitou Passenger Service Center & United Office Building is too small, and so is the berth.  The "Wu Yuan" landing stage as a gift from the Xiamen Municipal Government did solve the berth problem temporarily.  But the airport is also crucial(15) to the long-term development of Kinmen.  It is hoped that the Ministry of Transportation and Communication can accelerate the improvement and solve the communication problems both of the airport and docks in Kinmen.

The gift from the Xiamen Municipal Government, the "Wu Yuan" landing stage, is 30 meters in length and 7 meters in width, and costs 10 million RMB.  It functions like a floating dock.  Although it had belonged to the Port of Xiamen, it has never been used.  After being given to Kinmen, it will be used by the Shueitou Pier for new berth.  The opening ceremony was held yesterday.  Presiding(16) over the ribbon cutting were Magistrate Li Zhu Feng, Xiamen Deputy Mayor Pan Shi Jian, Councilman of County Council Hong Cheng Fa, Deputy Chief of Fuchien Provincial Communications Department Ma Ji Lie, Deputy Magistrate Yang Zhong Quan, Director of the Fujian Port and Channel Bureau Zhuang He Ming, Director of Harbor Bureau Yang Ting Biao, and Director of Port of Xiamen Wang Yong Jun.  They also visited the facilities of the landing stage.  Together, they expressed good wishes to the "Wu Yuan" landing stage for bringing new opportunities for Kinmen and creating a prosperous future for both Kinmen and Xiamen. 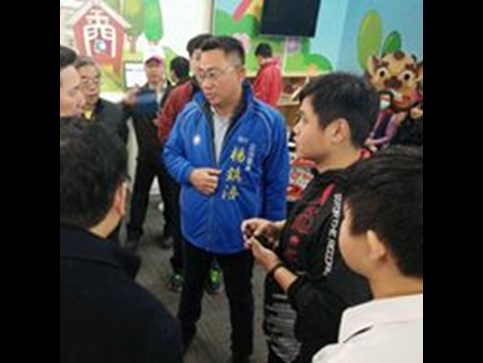